The encounter with the bicycles on the other side of the ocean and the energy of the beginning of the second part. What are the reasons for the changes in route and the final destination of this long journey.

The decision to return to Barcelona was not easy. There were a few days where we had a thousand changes of opinions but what we were clear at all times was that if we returned to Barcelona it would be with the flight back to Peru bought! So it was. We planned six months in Catalonia to recover well from the bellies and let the rainy season end.
Once in Catalonia we were rethinking what the most appropriate route would be, what part of Peru was more important for us because it was evident that we could not do everything!

I want to ride the part from Huancavelica to Abancay, where we had to take the bus. I like to draw continuous lines in the map whenever possible! The essence of cycletouringGerard

Objetives of the journey

We also knew that within six months we wanted to be in Argentina, to visit Gerard’s family and be able to spend a few days there to learn about their life project! I wanted to be back in Catalonia for work but Gerard was not sure yet, his dream of getting to Patagonia by bike was fighting against the fact of ending our a trip together.
Therefore, we draw a possible route to do in six months, the first 3 in Peru and from there, we would have to try to arrive in 2 more months to Argentina.
On May 4th we arrived in Lima and went straight to Santiago’s home. As always, we were welcomed as we were part of the family! We are very grateful for all what they have done! We met the bikes again and we left towards Huancavelica by bus three days later. Buses and bicycles don’t get among that well. Every time is an odyssey!

Bikes and buses, a complicated relationship

Although the bus staff tells you that there will be no problems if you pay an extra fee, it is still a struggle to get them on the bus. In fact, in order to get them accepted, we had to fight a lot with the man who distributed the tickets to the packages that are taken inside. People want to fit huge packages and the truth is that there is not enough space for everyone. We are talking about fairly cheap buses here, the ones used by the people from Huancavelica to transport their purchases from the capital. When the bus arrives, people gather to get their package up, it is the jungle. Can you imagine the two of us with huge boxes with the bikes dismantled (which already weigh quite a lot) and with all the bike bags in hand, trying to be the first ones? If too many packages with different shapes are placed before, it is impossible for the bike boxes to fit. Gerard managed to get one inside and then I passed him the second over the heads of the people, which was easy thanks to Peruvians being quite short! After an adrenaline rush and the tension of having to fight to get the bikes on the bus, we were sitting inside, breathing in relief on our way to Huancavelica. 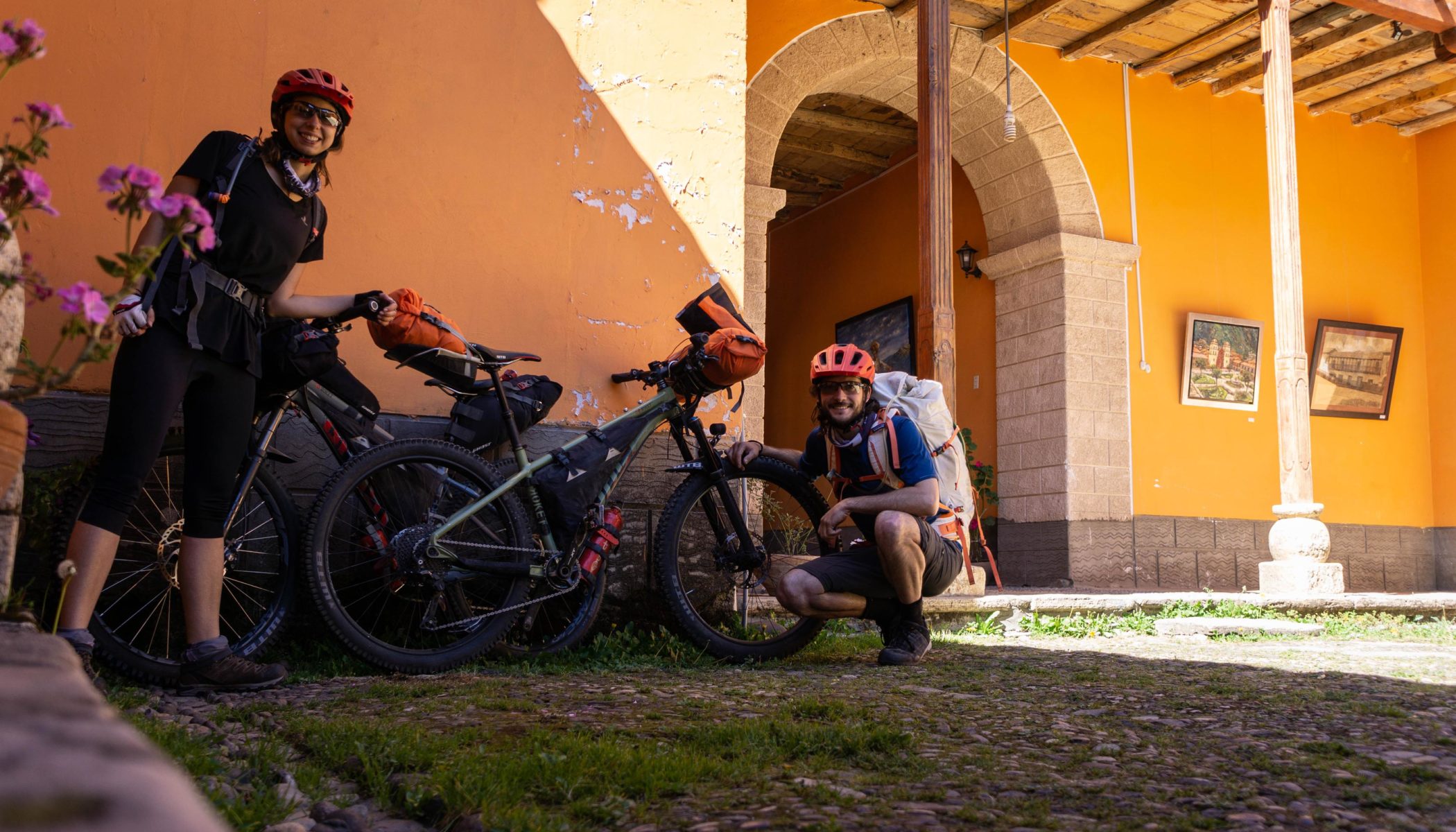 Photo-start of the second part of the trip in Huancavelica

We arrived in the morning after a tough night in the bus. We had gone from Lima, at sea level, to a 5,000m pass in less than 5 hours and, obviously, we were not feeling that well. We spent three days with a headache and a stomach-ache and after that, Gerard caught an intestinal attack with fevers and vomiting again. The mood went down thinking that we would have the same experience as on the last trip, that we may have not fully recovered! We are already advancing you, however, that has not been the case! Apart from some episodes of discomfort we have been able to follow the route until the end. 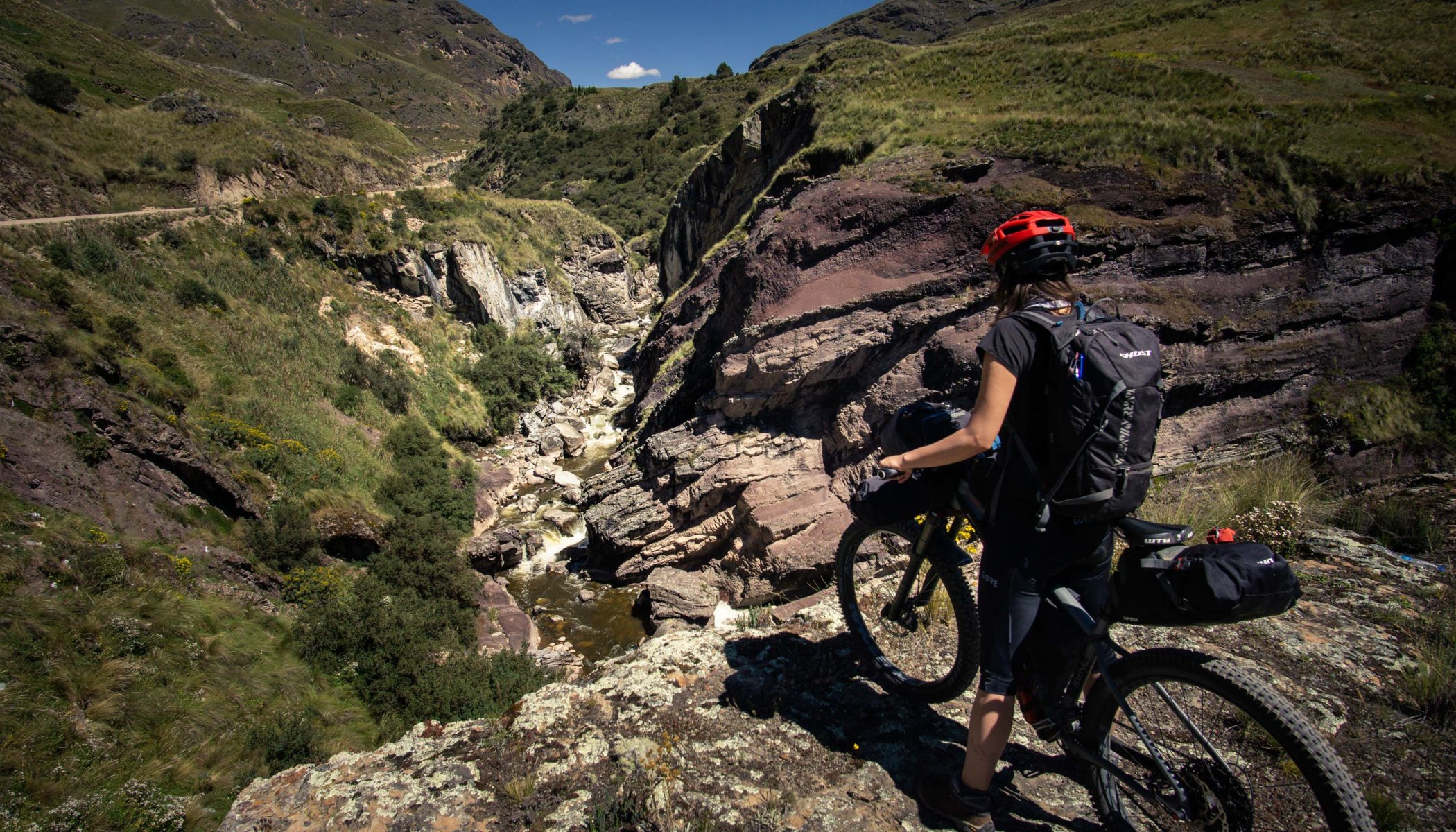 Ariadna looking at the river down the canyon

Finally, we started with plenty of energy towards the Laguna Choclococha. We designed the track thinking that acclimatization would take us the same time as on the first trip, but this was not the case. The climb was very sunny, we had to stop often to put on some sun cream and drink water. A curvy road along the river took us to the end of the stage and it was only 12 in the morning so we decided to continue a little more. Pedalling and pedaling, we made it to Astobamba, the end of the following day’s stage! So, we did two stages in one day, we were more fit than we thought. 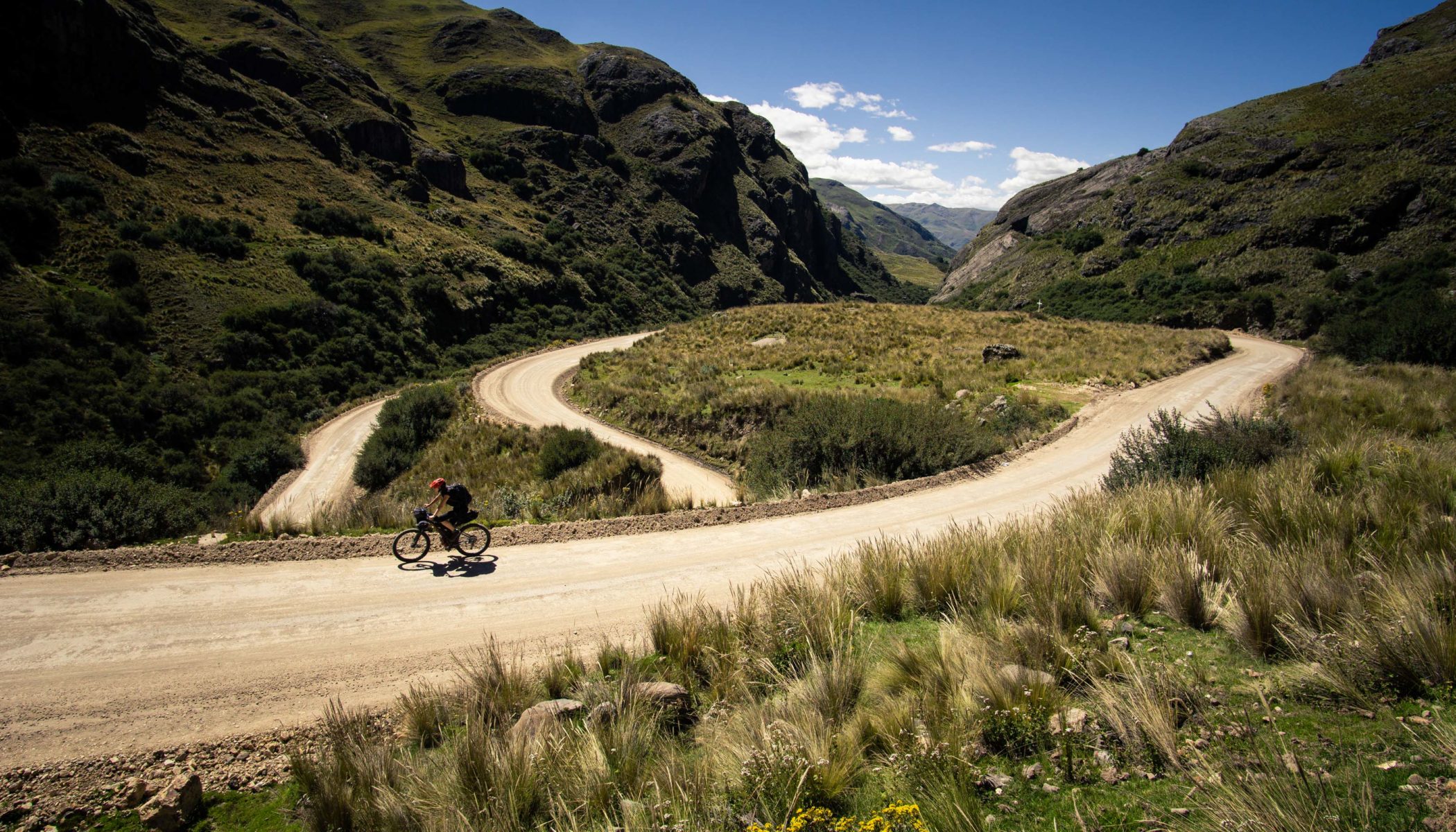 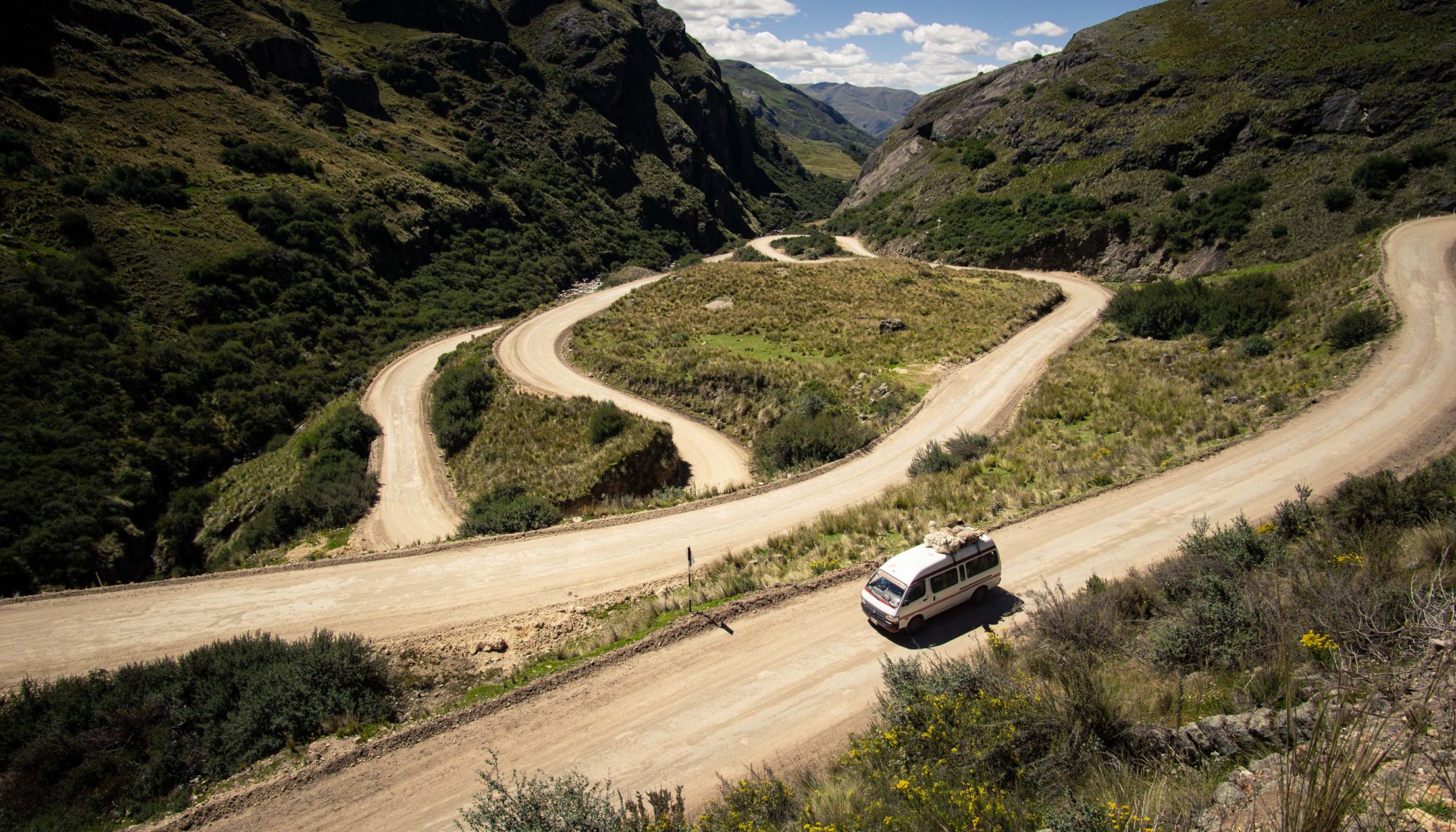 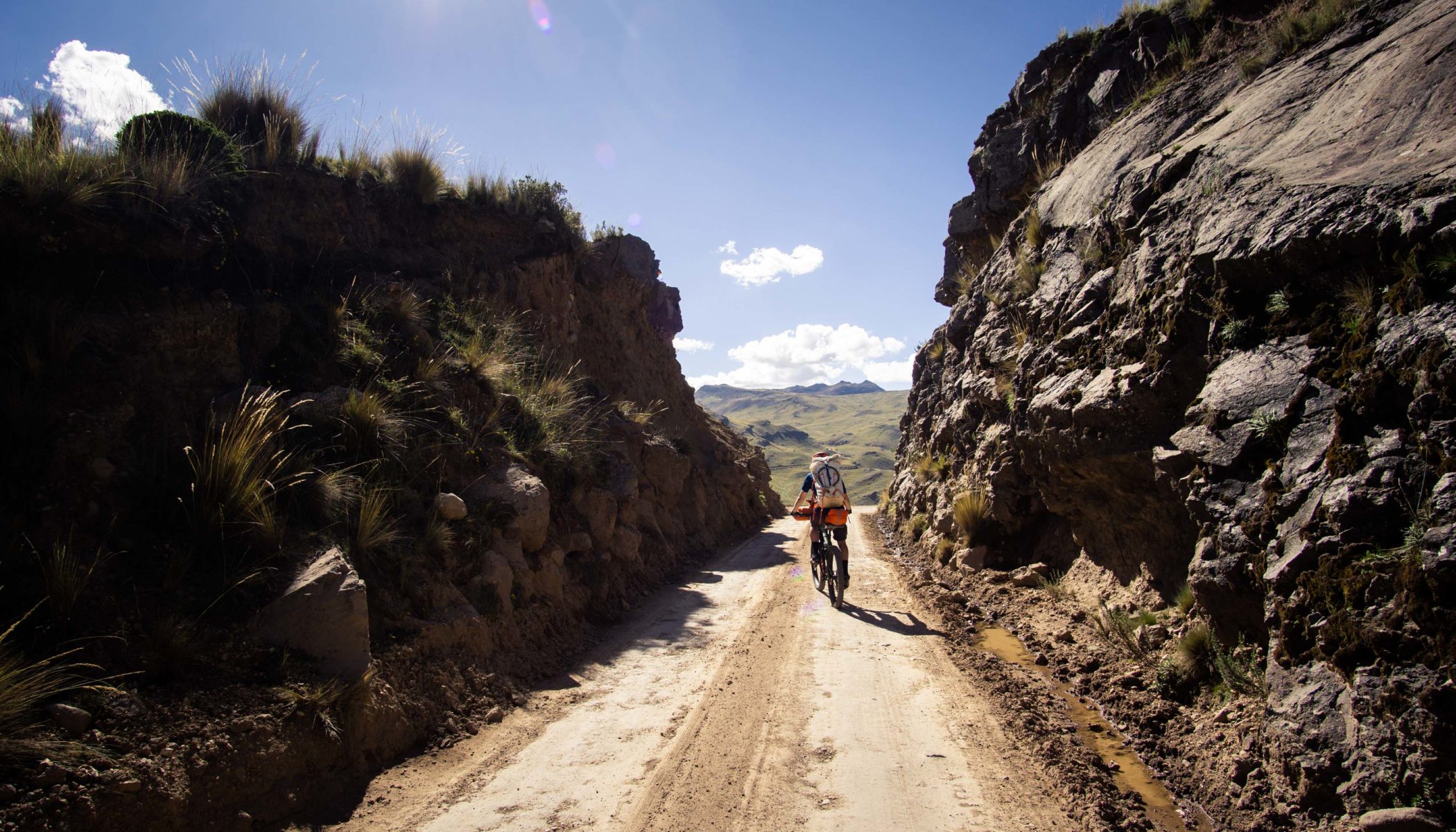 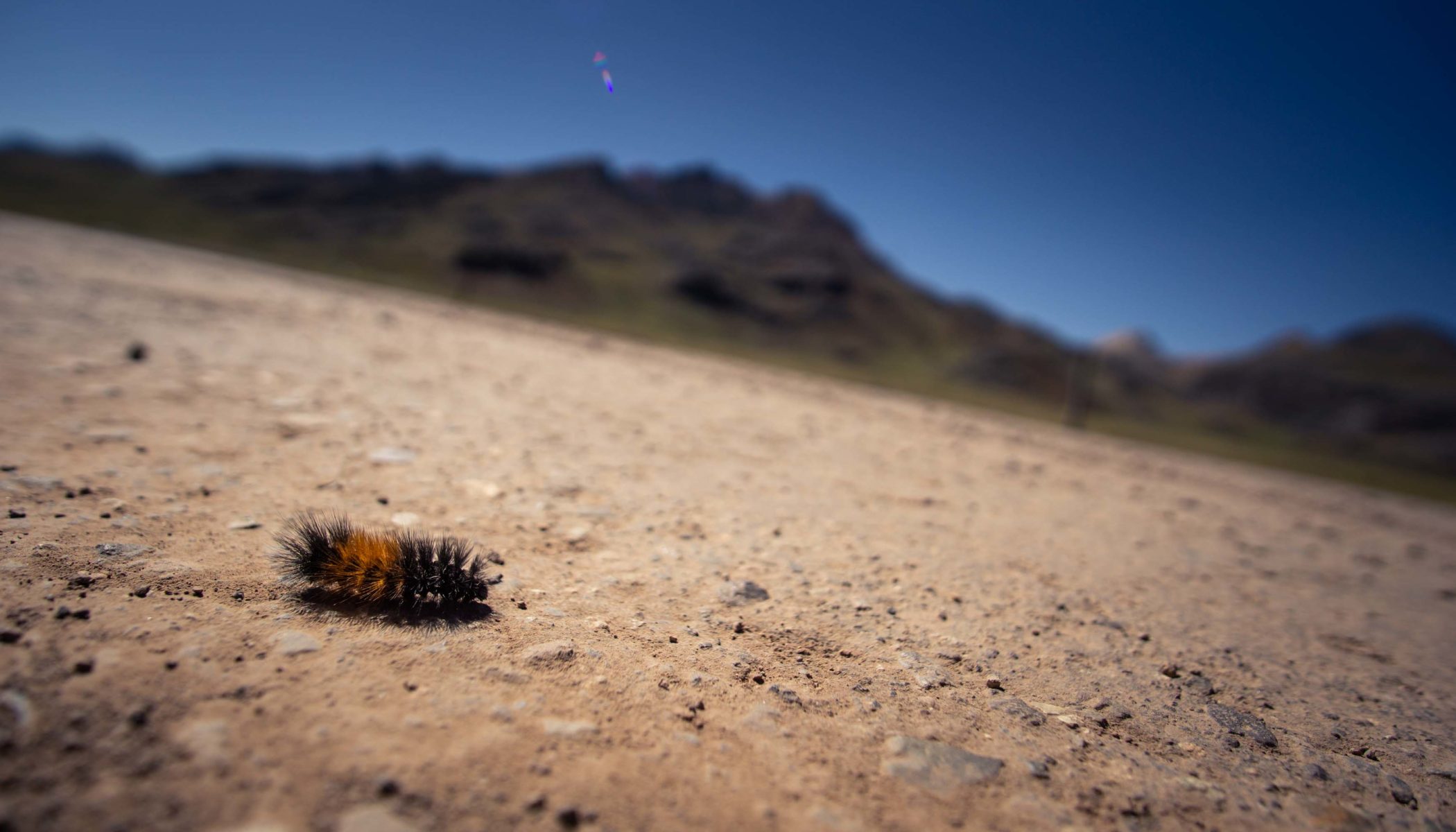 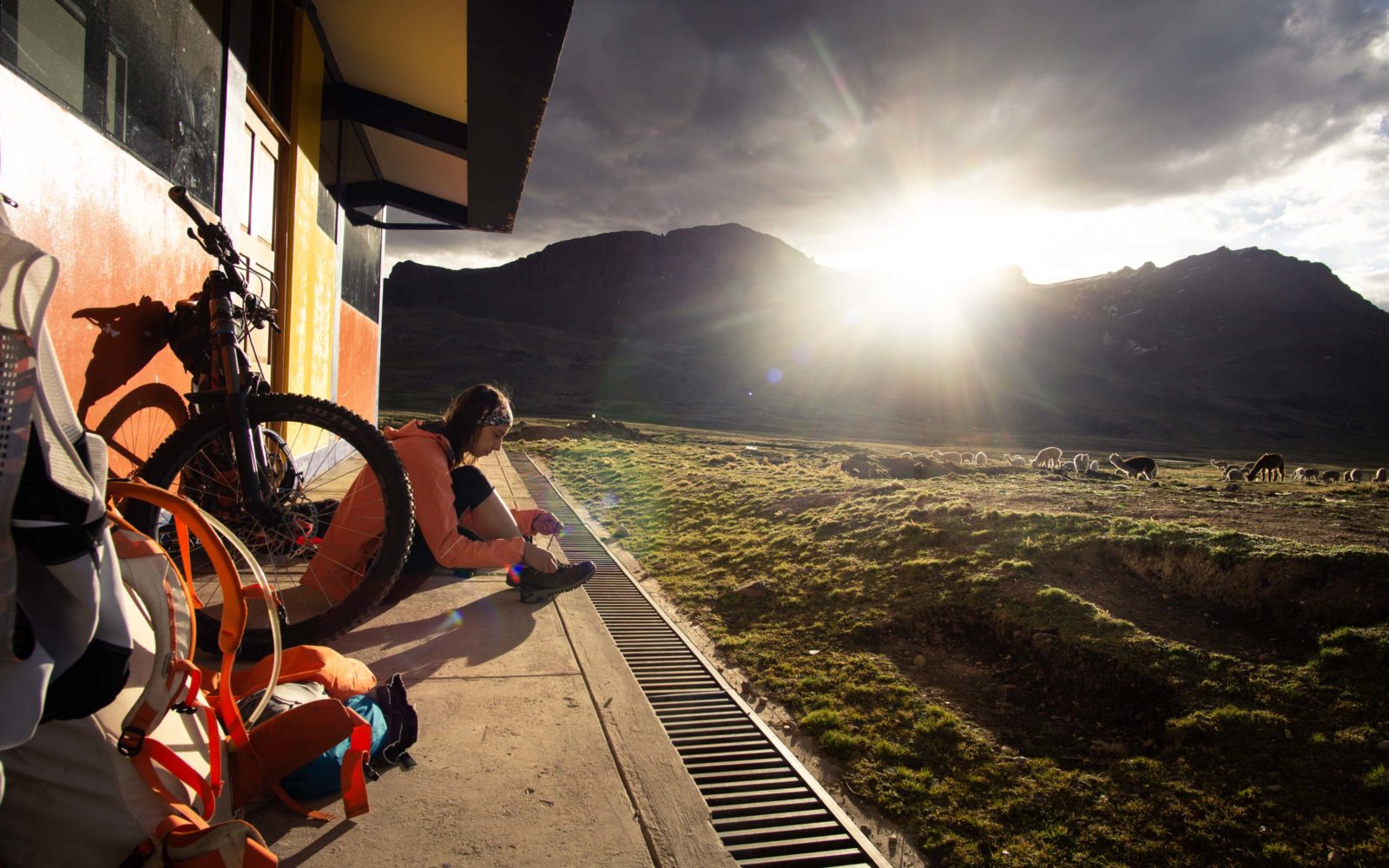 Changing and drying clothes in Astobamba with astonishing views. Llamas and alpacas at sunset 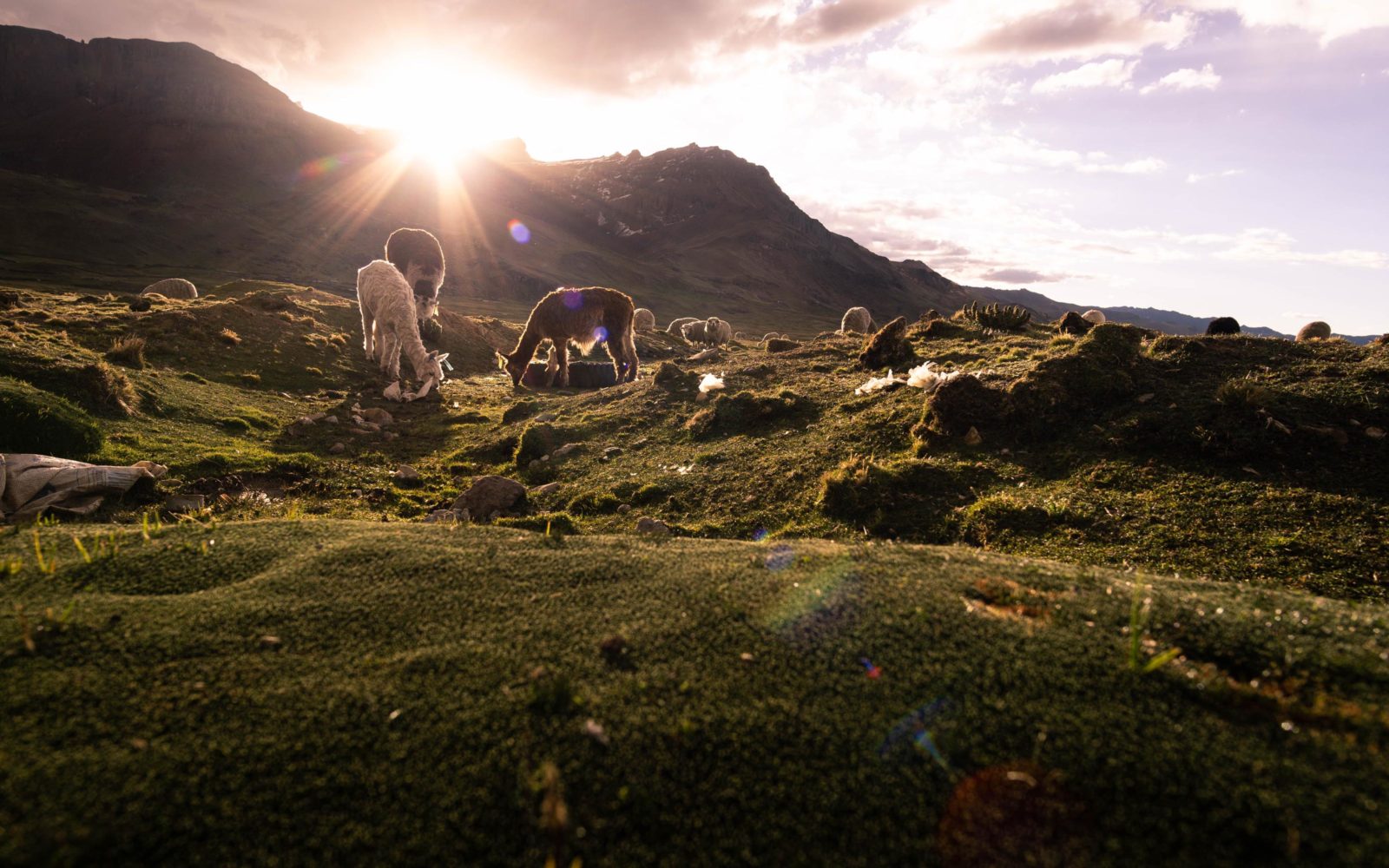 The arrival in Astobamba was spectacular. A very beautiful sunset in a very small and deserted town, yes, with fields full of llamas and alpacas grazing. We had risen from 3,600m to 4,600m and we began to notice the height, it was quite cold and the sun was disappearing between the mountains. So, we put on warmer clothes and started preparing dinner.
An endearing lady offered us a place to sleep, like the ones in the pictures. 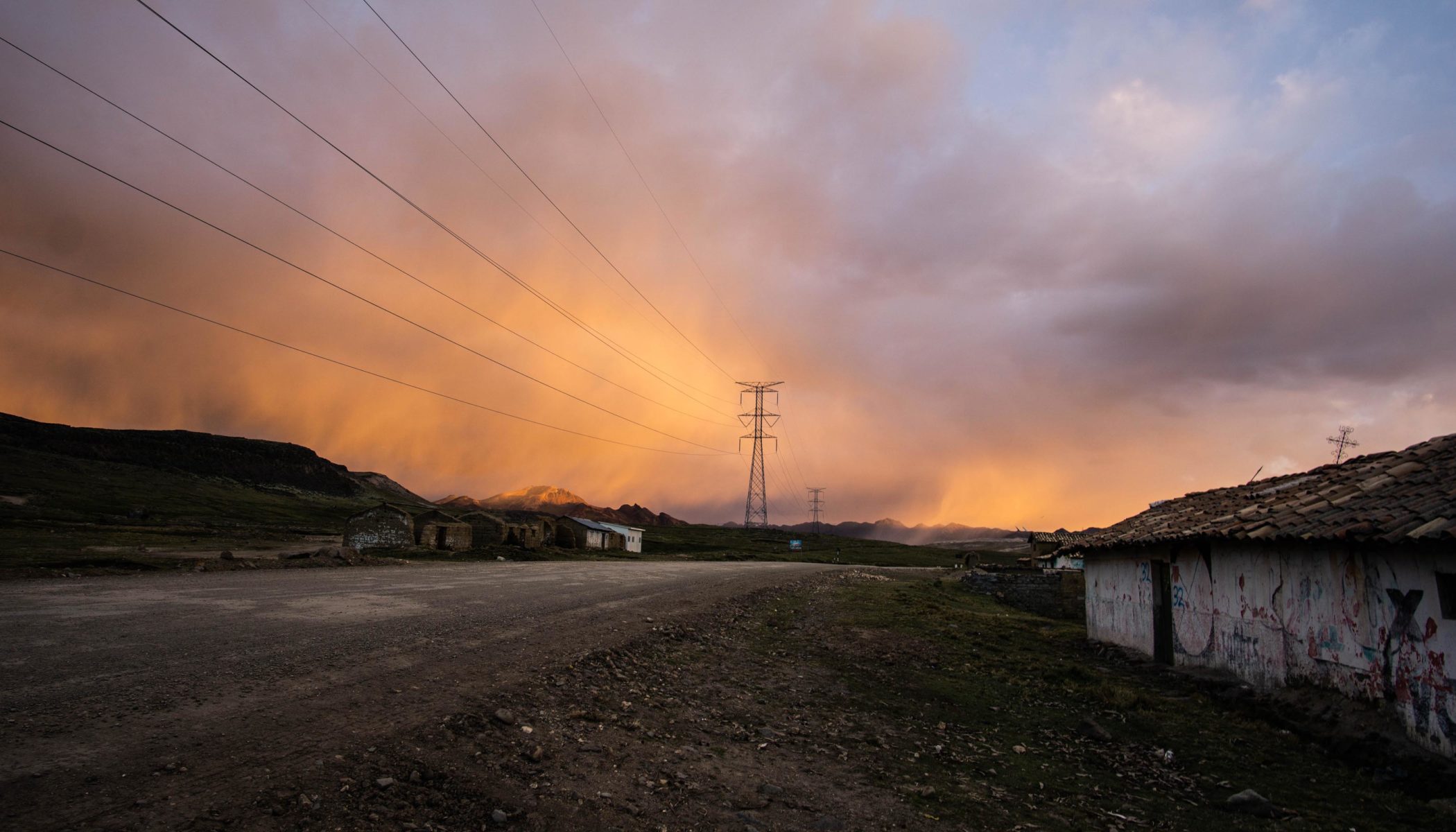 I went with her to see it. It was a hut with sand floor, full of dried alpaca skins and barrels of gasoline. The good intention of the lady so that we wouldn’t sleep outside was appreciated, but I think I would have had allergy when sleeping on those skins and it was too sad to think that those had been alive alpacas before. Being really sad about it, we still decided not to sleep there and set up the tent in a shed to minimize the wind instead. 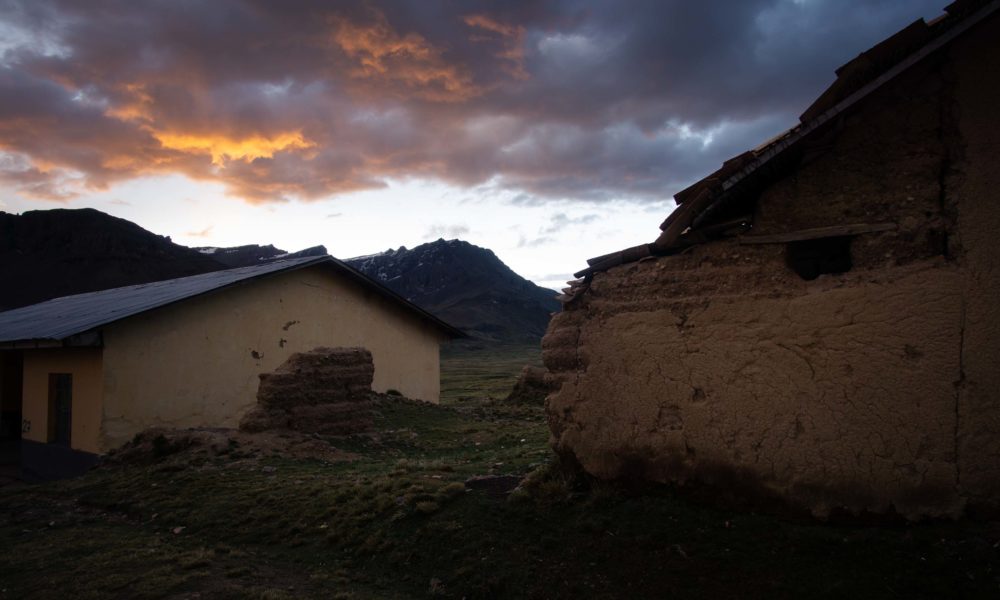 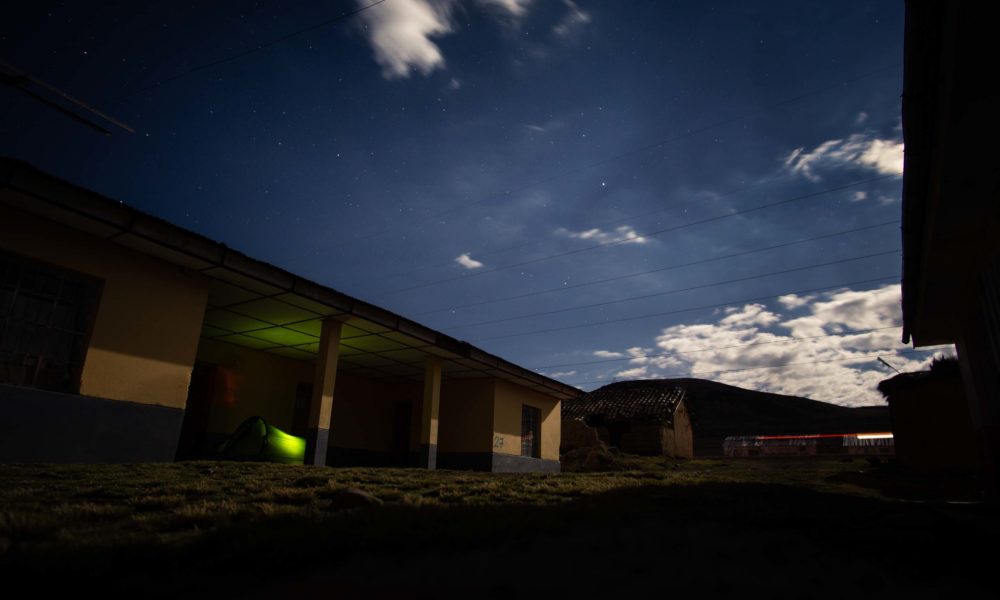 Camping down a roof in Astobamba 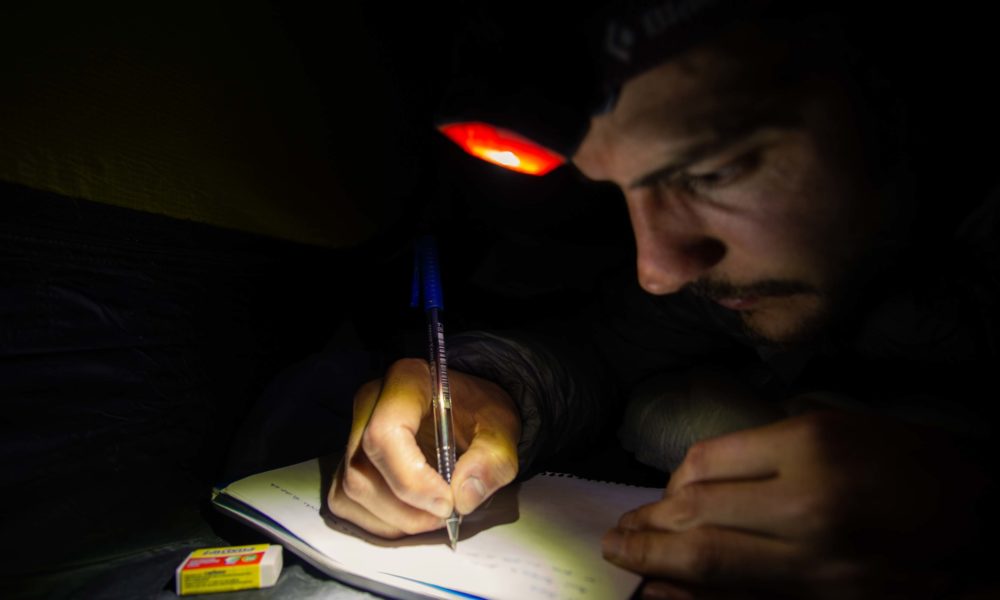 Writing the travel journal inside the tent with the headlamp

It was very cold, but the sleeping bags fix everything! We are so lucky to have these cosy bags. However, I didn’t sleep very well. I could hear noises that woke me up and made me alert: barking dogs, raisins, cracks and crocks. What if someone comes? In addition, I had a headache and could not get asleep again, height does not help to sleep.
The following day we began to pick up our stuff very early, the water was still frozen and it began to melt with the first rays of sun. We had oatmeal for breakfast and when we had everything ready, we approached the shop of the dear lady to ask her for bread.
We were not lucky but she insisted to prepare something for us to eat. We had already rejected the night and did not dare to do it again even though we wanted to start pedalling. After a while, she came out to the street where we were waiting for her, and gave us an expanded polystyrene tray (waste!) with fried trout and boiled potatoes. We try to make vegetarian meals but sometimes, as was the case, it is difficult! 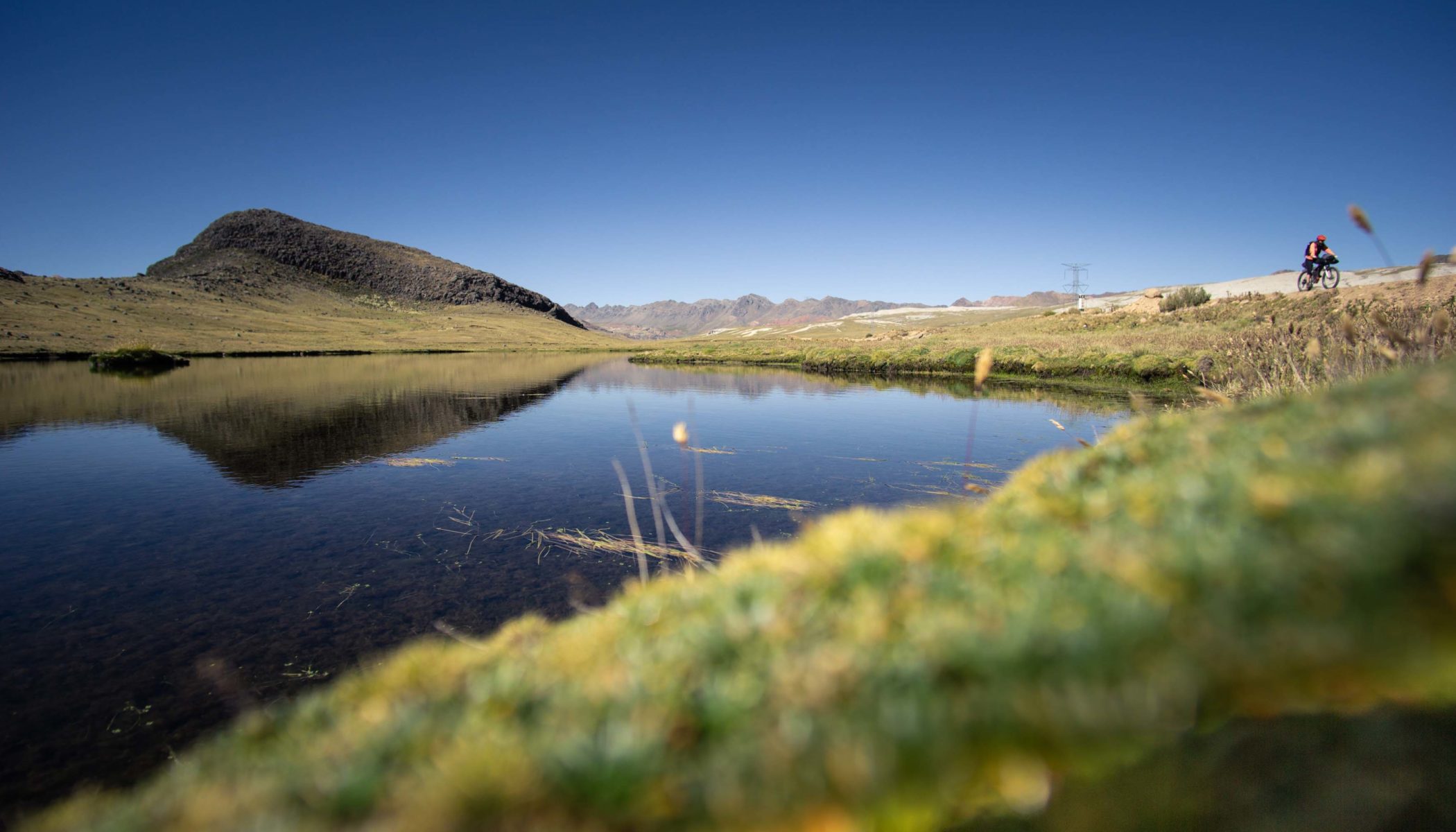 Nice lake on the side of the road on the way to Pucapampa from Astobamba.

Finally we could start the climbing to the pass, a well-groomed track with some small towns on the way. It was the second day of pedalling and we were already at 4,800m, without any difficulty breathing. We remembered the first pass of 4,900m we did, having to push hard. This time, on the other hand, was a quiet pass with good views and a cold but fast descent to the Lagoons. The stage had to be shorter, we again exceeded the planned kilometers and arrived at noon with little sun, tired, but fulfilled with happiness! 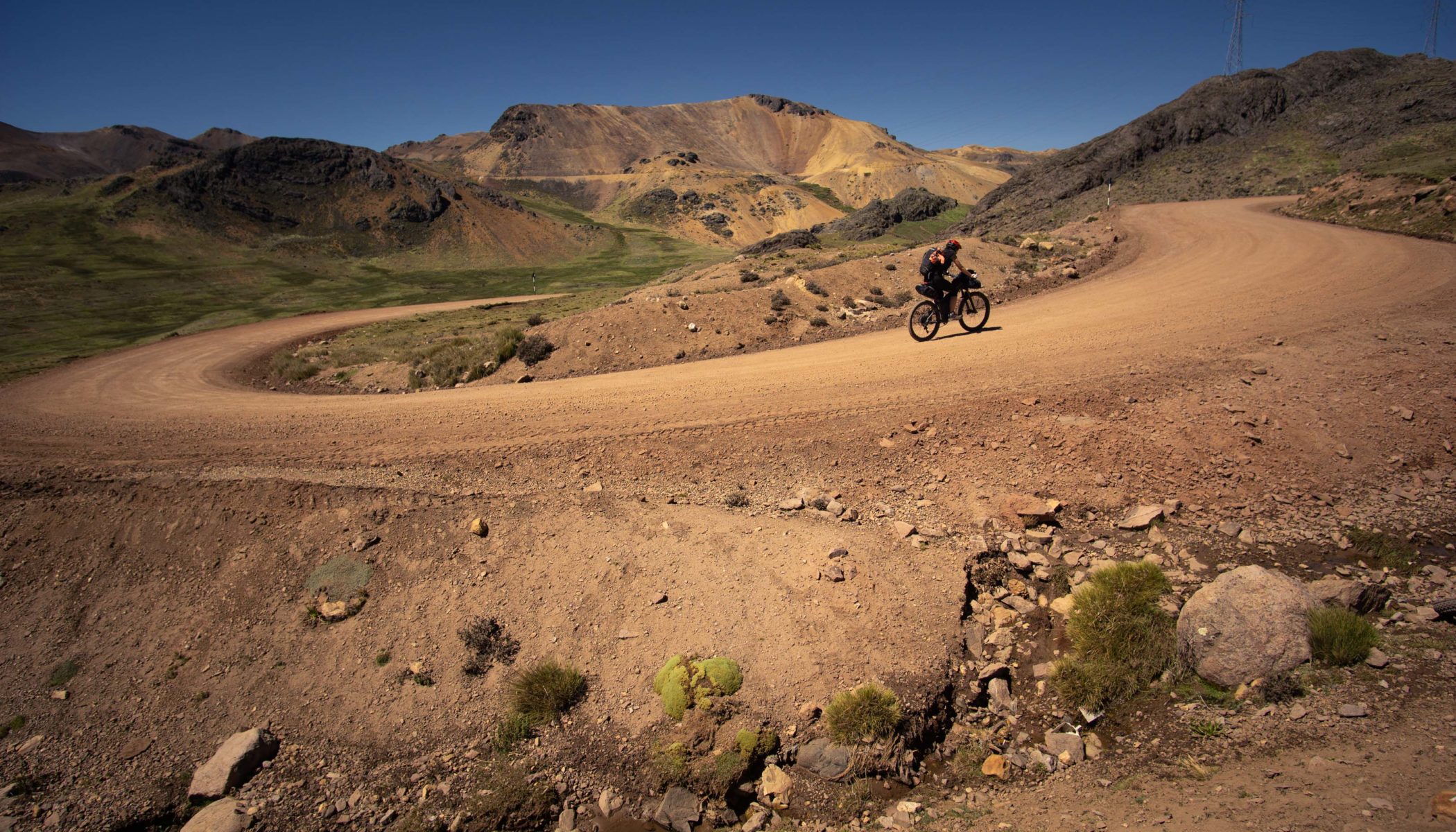 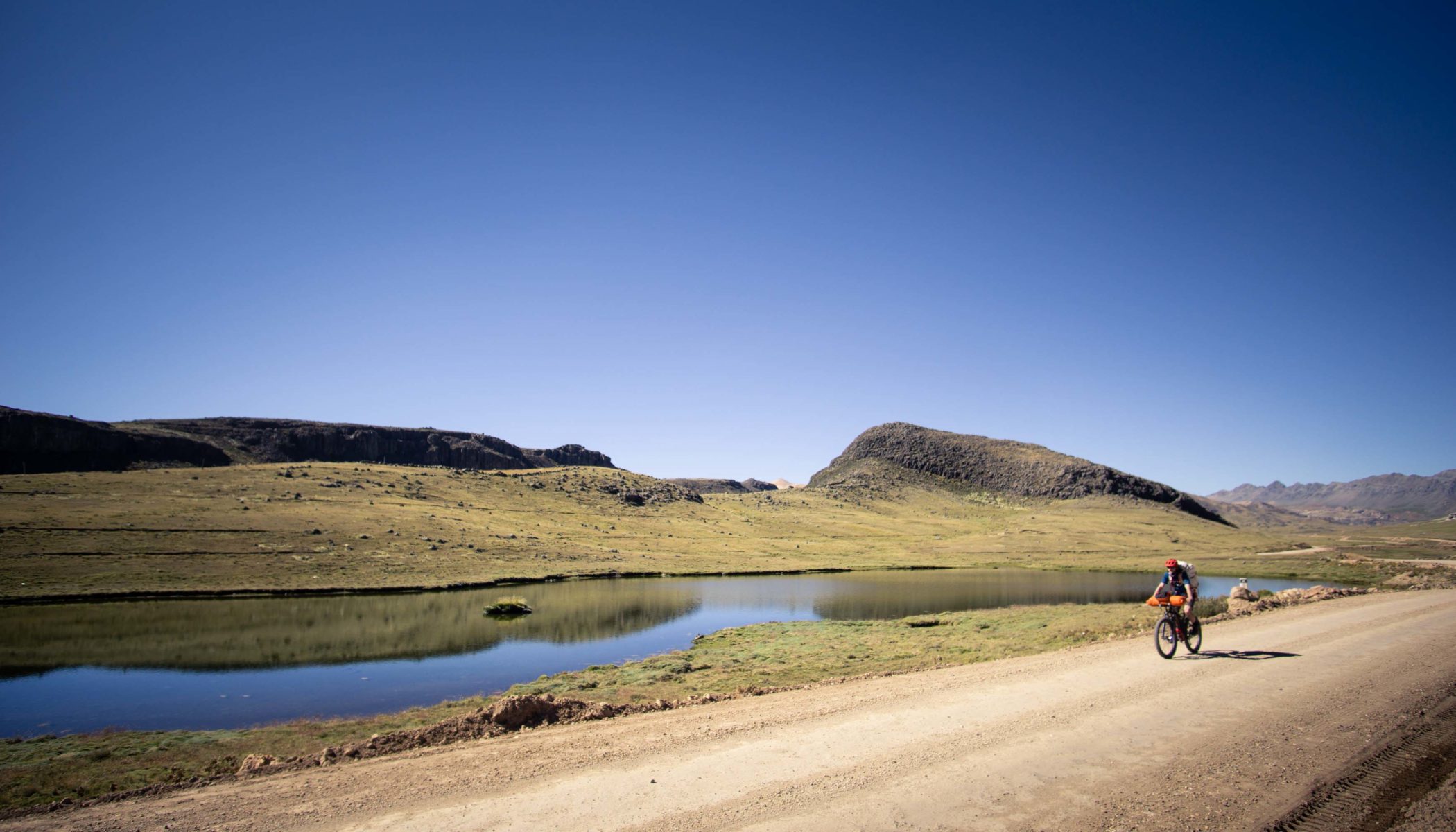 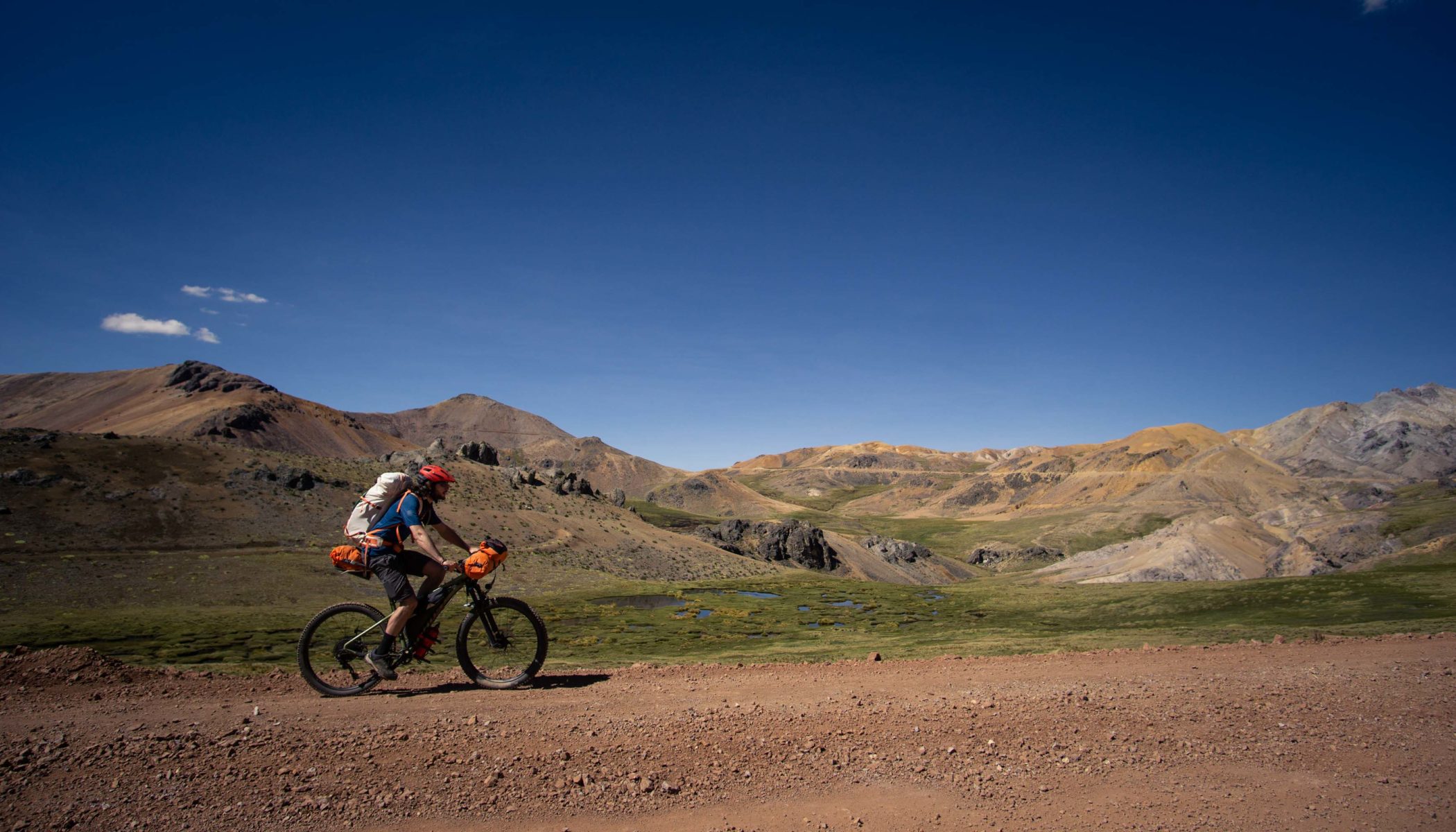 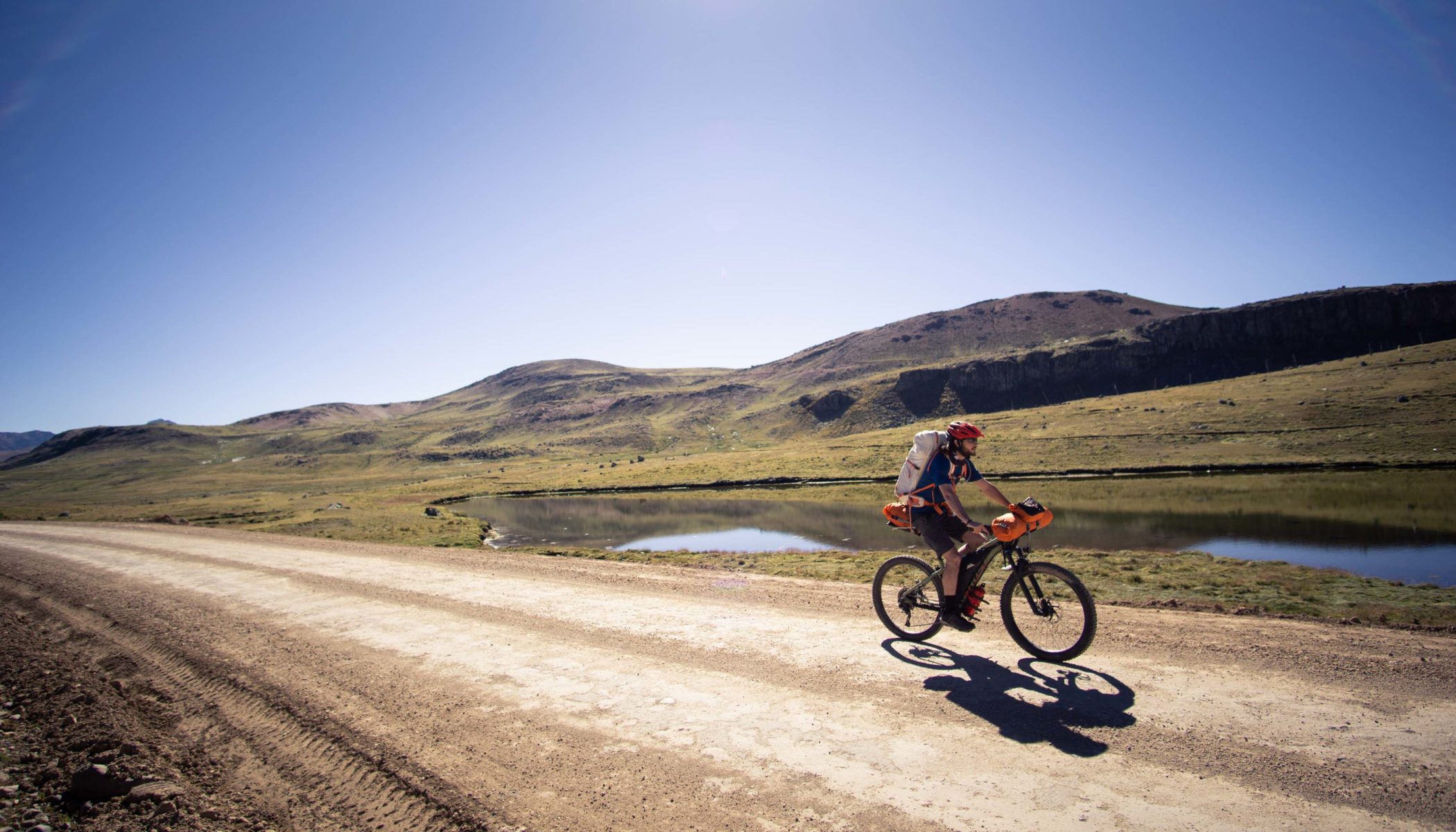 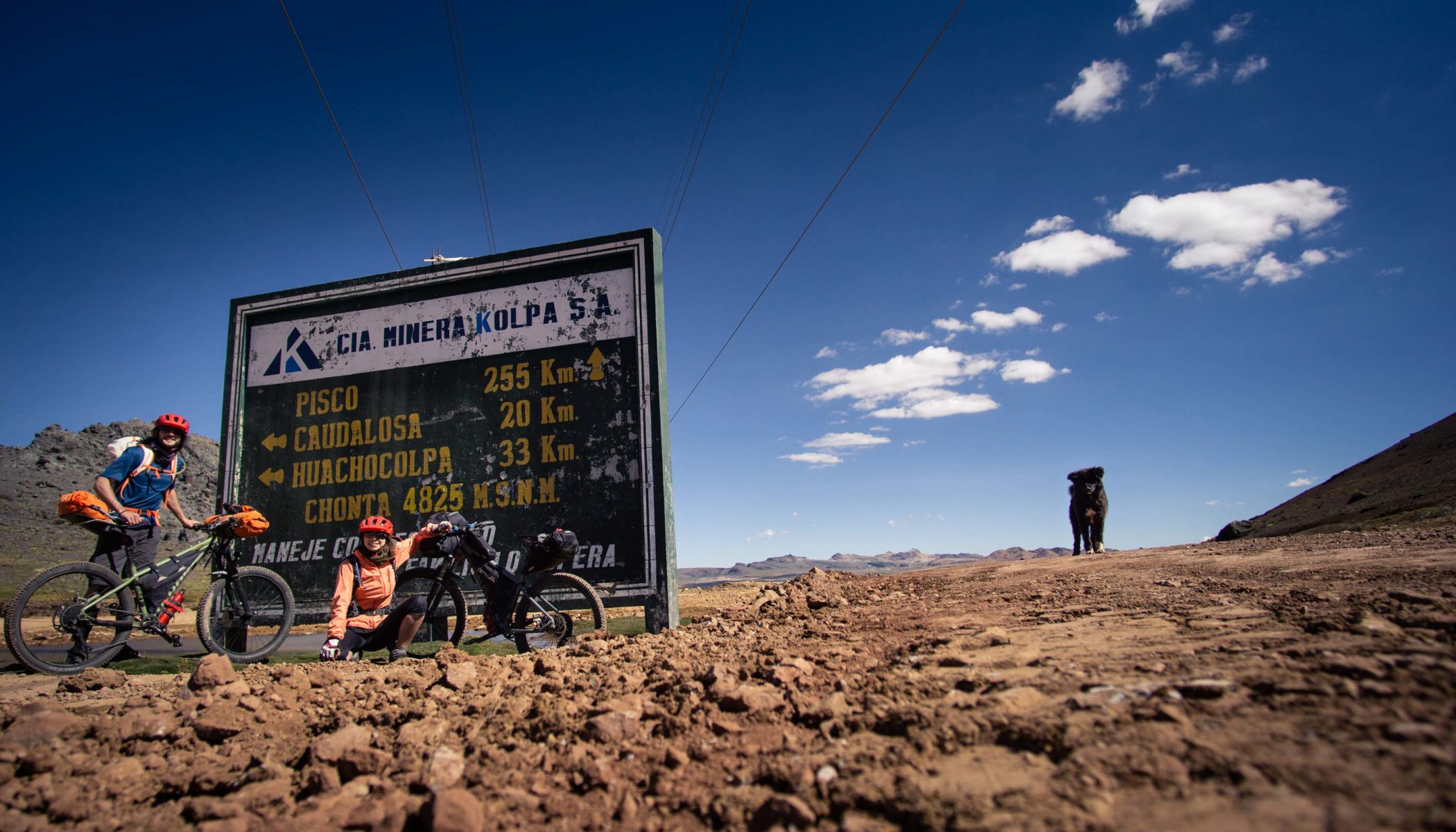